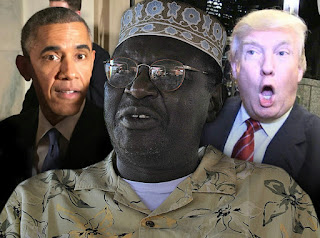 President Obama's half brother, Malik Obama told the NY Post that he's disappointed in Barack's administration and that he'll be casting his vote for Donald Trump in the November presidential elections in the US. Malik Obama, who was a longtime Democrat, says he won't vote for Hillary Clinton for several reasons which include her email scandal, Beghazi incident, same sex marriage and the killing of
former Libyan dictator, Muammar Gaddafi.

Malik blames Hillary Clinton and his brother, Barack Obama, for killing the Libyan dictator, whom he said was his close friend.


He said, in regards to the email scandal, Clinton should have known better than to use her personal email for classified material, adding that he feels like he's more Republican now because he doesn't support same sex marriage.

Malik Obama currently lives in Kenya but says he used to live and work as an accountant in Maryland, and says he's still registered to vote there.