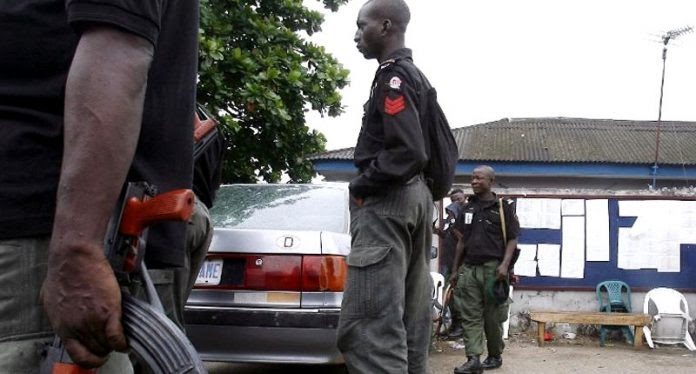 Attah Ede, Makurdi
THERE was pandemonium in Zaki-Biam, Ukum Local Government Area of Benue State on Saturday as commercial motorcyclists, popularly called okada riders, clashed with policemen over the killing of their colleague by a policeman.
Commercial activities were temporarily disrupted in the Zaki Biam area along the Katsina-Ala/Taraba State highway, as the irate Okada riders protested and used the dead body of their colleague to barricade the ever busy road.
An eyewitness, who identified himself as Terdoo, said the violence erupted after some policemen assaulted an okada rider and his passenger on the popular Zaki-Biam yam Market along the Expressway.
He said, at about 12:30pm today(Saturday), an okada rider who was
carrying a passenger, in a bid to escape from the policemen for fear of being harassed hit a passerby attempting to cross the road.

“While trying to get himself together, policemen, on sighting him quickly ran to the scene of the incident, seized his motorcycle and accused him of contravening traffic order.
The middle aged man, according to the eye witness, pleaded with the policemen, even after the passerby had left the scene, but the policemen insisted that he (Okada rider) would be arrested.
In the process, one of the policemen allegedly pulled out a pistol and hit the man’s head and he died Immediately.
Another eye witness who also identified himself as Mark-bull who is also an Okada rider said that Okada riders have suffered series of harassment from the police in the zaki-biam axis and they decided to seize this opportunity to mount a protest carrying the corpse of the deceased with them to the police station and possibly burn the station down.
When contacted, the Benue State Command police public officer, ASP Moses Yamu, said he has not been inform about the incident and promised to contact the Divisional Police Officer in charge of Zaki-Biam.
at July 23, 2016