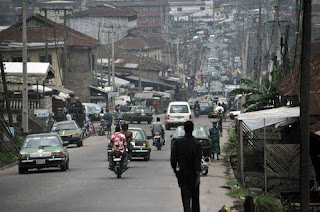 A 35 year old married woman identified as Omolola Atejioye committed suicide by hanging herself inside her home at Ago-Iwoye road, Ilishan-Remo, in Ikenne Local Government Area of Ogun state on Tuesday August 16th. According to Tribune, the husband of the deceased came back home from work to find his wife's lifeless body dangling from their ceiling. She did
not leave behind any suicide note.


The state acting Police Public Relations Officer, Abimbola Oyeyemi, who confirmed the incident, said the remains of the deceased have been deposited at Babcock University morgue where her husband works. Oyeyemi said a post mortem will be carried out on the deceased to ascertain the cause of her death.


“A member of staff of the Babcock University reported to our men in Ilisan-Remo, that he returned from work around 5.30pm, and met the body of his wife dangling from the ceiling of their apartment, after the door was forced opened. The policemen later brought the body down and it had been deposited in the mortuary of the Babcock University in the same town. The deceased did not leave any suicide note. A post mortem would be carried out on the corpse”he said