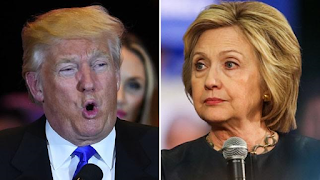 Republican Presidential nominee Donald Trump has labelled his rival Hillary Clinton 'the devil' and suggested the election will be rigged as Hillary Clinton now leads Donald Trump in polls by 8 points — 50 percent to 42 percent — up from a single-point difference last week following the Democratic National Convention (DNC).

Clinton was also helped by a series of controversial statements made by the Billionaire in the past week regarding the family of a fallen American soldier and Trump's suggestion that Russian hackers should seek out deleted Clinton emails.

In response to an emotional attack on him by the parents of 27-year-old army captain Humayun Khan, who died in a suicide bombing, Trump had claimed to have made sacrifices equal to their son.

A range of top figures and organizations from across the political spectrum such as
John McCain, Barack Obama and the Veterans of Foreign Wars have criticized him for his comments.
But instead of Trump addressing his controversial statements during a rally in Columbus, Ohio on Monday, he started another controversial talk suggesting the election could be rigged while on Monday night in Pennysylvania called Clinton 'the devil'

He did not elaborate but later repeated his statement Monday night with Sean Hannity on Fox News, saying: “November 8th, we’d better be careful, because that election is going to be rigged. And I hope the Republicans are watching closely or it’s going to be taken away from us.”

Trump blasted Bernie Sanders for lending his support to Hillary Clinton’s campaign, Mr Trump claimed Mr Sanders had “buyer’s remorse” over his decision and said: “He made a deal with the devil. She’s the devil.”