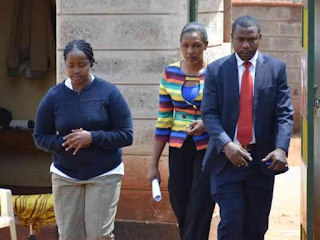 A Kenyan woman has been arrested for allegedly stabbing her husband to death for arriving home late and drunk.
Ann Mbaithe (pictured left) was accused of stabbing her husband, Daniel Githuka, 30, in the chest and killing him, after he returned home in the early hours of Saturday, July 30 in Tinganga village, Kiambu town.

The deceased's mother Elizabeth Wanjiku said he worked at a neighbouring school and usually returned at about 10pm. She said the couple had been married for five years and had no problems. The
had one child aged four and a half.


"My son and I live in the same compound. I heard confrontation from my house past midnight," Wanjiku recounted.

The mother said she got out of bed and went to Githuka's house where she found him arguing with his wife. Her son stood his ground saying he was the head of the house who should not have been confronted over the matter. She had not noticed the knife Mbaithe had been holding since she folded her arms.

"It was not a physical confrontation but my son's wife suddenly attacked and stabbed him in the chest with a knife. After my son was stabbed I called for help from neighbours but upon reaching hospital he was pronounced dead due to loss of blood."

Wanjiku said she reported the matter at Kiambu police station. Officers arrived  later and arrested Mbaithe at the home. County DCI boss Amos Tebeny said Mbaithe will be charged with murder once investigations are completed.