Why do people hate you?


A hater is someone who discredits, devalues or downplays your accomplishments.
Your failures make a hater happier than their own success. Haters need to see you go down to lift themselves up.
If you have haters, the solution is simple: ignore them and keep doing what you do. If a hater can directly influence your plans, then your plans aren’t ambitious enough.
You can usually dismiss a hater. If you’re bored, you can harass them. If you’ve got nothing better to do, they’re great fun to troll. But I don’t recommend wasting your time or energy on haters.
There is no magic wand to get rid of haters. There is no secret spell to win them over to your side. Some people won’t like you regardless of what you do. That’s alright. The world is a
big place.
Many people wonder why haters exist. Why would anyone criticize the accomplishments of others? What motivates a hater to hate? And what motivates a hater to hate on you, specifically?
If you’re a genuinely mean person, success isn’t the reason why you have haters.
You have haters because you’re an asshole. Your success exposes you to more people, and those people also discover that you’re an asshole. If so, the following does not apply to your haters.

For those of you who aren’t assholes, however, I present the top 5 reasons why you have haters.
Fair warning though: once you understand them, you will no longer feel confusion or even dislike. You’ll just feel sorry for them.


1. You have haters because you improved

This reason underpins all of the others. Everyone wants the good life. Few people are willing to do the work necessary to get a good life.
When you work hard and improve, you will get more of the good things in life. Rather than elevate themselves to your level, haters would rather drag you down. The quickest way to get haters is to succeed.
Since people aren’t willing to exert the effort required to get the best things in life, they have to believe that you were the recipient of a blessing. Average people will hate you because they think you are lucky. By definition, most people are average.


2. You have haters because you surpassed people 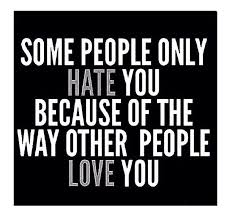 Your improvement may bother people who are used to you existing below their level. They may openly campaign for you to get your life together, but they secretly relish their superiority over you.
If you spend most of your time around people who care about you, you won’t have this issue. Close friends and family genuinely want you to succeed. Your casual peers will not because change disrupts the social order they rely on for their self-esteem.
When you move past them on the social ladder, they’ll feel a need to pull you down.
Progress on the social ladder is almost always the result of progress in other areas of your life.
They will constantly remind you of things you did or ways you thought once the roles are reversed. Their hope is put you back where you were so that the balance of power is restored.


3. People passed on you so now they hate you

You often see this in the romantic realm. Once upon a time, you were interested in a person. This person did not return the interest.
If they’re nice, they friend-zoned you. If they’re savage, they ripped your soul to shreds. You got over it.

In the meantime, you improved into an attractive person. Now they want to give you attention.
But you aren’t interested because you’re capable of attracting higher-quality people now. You also remember that they snubbed you.
These people morph into a diabolical type of hater. You’ve elevated yourself to someone worthy of their time, but you don’t want them. Since they missed the opportunity to have you, they get sour grapes syndrome when the situation is reversed.

They invent reasons why you aren’t worthwhile. This makes them feel justified in hating on you. After all, there must be something wrong with you since you’re no longer interested.


4. You weren’t supposed to become anything 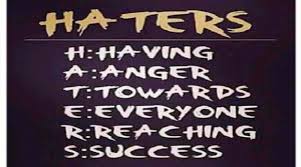 If your life is on a downward spiral, people will write you off. I don’t condemn this because there’s no point in going down with a sinking ship if the captain is determined to destroy it.
If you manage to turn things around after the ship’s been abandoned, some interesting things happen.
Some people will be angry that you didn’t drown. They’ll hate that you’ve acquired a better life. You were supposed to be nothing. Instead, you became something.
This sounds similar to the “surpass people” motivation for hate. The difference is that you don’t have to surpass the person. You don’t need to fly higher; you just have to not crash.
These toxic personalities only feel satisfied when others suffer. If you come back to life after being left for dead, they need a narrative to explain why they abandoned you.
Rather than explain that you were a mess and wish you well, you have to remain the bad guy. It’s easy to hate the bad guy.


5. You stepped away from the nonsense. Haters didn’t.

Maybe you weren’t the captain of the ship, but you were the first mate. Still, it was destined for disaster. One day you got smart and jumped ship.
For the rest of your days, you’ll be the worst type of human being to the individual or group you abandoned. Even though you acted in your best interest and became a better person, all they can see is that you’re now a traitor.

This is another reason why people remind you of what you used to be or where you came from. This is said to hold you down or to pull you back. If where you came from was trash, the other rats will resent you for escaping the sewer.

This list is not exhaustive, but if you’re experiencing unexpected hostility—especially from people you once or still do consider friends—these are the most likely reasons.
If you liked this article, please share it with your friends by hitting any of the SHARE BUTTONS below. Thanks!