The Story of JAY-Z’s Ascent to Billionaire Status, as Told by JAY-Z Lyrics 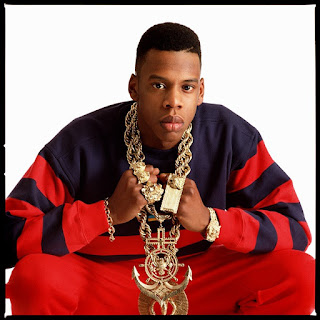 JAY-Z is rap’s first billionaire, and anyone who has been paying attention to his music across the last couple of decades knew it was inevitable. Through his lyrics, it’s easy to track the living hip-hop legend’s rise from New York City drug lord to the one percent of the one percent.
“You’re coppin’ me like white crystal/I gross the most at the end of the fiscal year than these niggas can wish to” — “Dead Presidents II” (1996)

Before JAY-Z transitioned from rapper to mogul he was trying to transition from drug dealer to rapper. Moving weight was his first trade, and the product sold itself; in Jay’s eyes, so did his music. He invested in himself when he started Roc-A-Fella Records with friends and, before long, he had mastered rap as a hustle, too. For JAY-Z, business always
came first.
“And if somebody woulda told ’em that Hov would sell clothing/Not in this lifetime, wasn’t in my right mind/That’s another difference that’s between me and them/I smarten up, open the market up/One million, two million, three million, four/In 18 months, 80 million more/ … Put me anywhere on God’s green earth, I’ll triple my worth” — “U Don’t Know” (2001)


Jay’s capitalist acumen is his most prized trait, and he put it to use figuring out how best to monetize his rap persona. At the turn of the century, the answer was Rocawear. The clothing company he founded with Dame Dash represented the first big diversification of his portfolio. Dash claimed the company made $100 million in 2001 and $300 million in 2002. (In 2007, Jay sold Rocawear to the Iconix Brand Group for $204 million.) His promise to triple his worth came to fruition: From $286 million in 2005 to $900 million in 2018.
“You looking at the black Warren Buffett/So all you critics can duck sick” — “Threat” (2003)

JAY-Z has demonstrated an uncanny foresight in both his music and business careers. His ability to identify trends contributed to his longevity in rap, and that same vision helped make him a great businessman. It’s fitting, then, that several years after declaring himself the “black Warren Buffett,” Jay appeared alongside the famed investor (current net worth: $84 billion) in Forbes.
“I’m not a businessman; I’m a business, man!” — “Diamonds From Sierra Leone (Remix)” (2005)

By 2005, Jay had opened his first 40/40 Club, scored endorsements with Reebok and Nokia, and was eyeing deals with Hewlett Packard, Budweiser, and Armand de Brignac. He was a year into his Def Jam presidency and re-emerging from semi-retirement. He had fully transitioned from a rapper into a brand.
“Take what the Forbes figured, then figure more/’Cause they forgot to account what I did with the raw” — “Roc Boys” (2007)


In 2006, Jay topped Forbes’ first-ever Hip-Hop Cash Kings list, earning an estimated $34 million that year. He seemed satisfied with the placement—but not the dollar amount. In typical JAY-Z fashion, on “Roc Boys,” he reminded them—and us—that some of his early empire was built off the books.
“Baby I’m a boss, I don’t know what they do/I don’t get dropped, I drop the label” — “On to the Next One” (2009)

After a fruitful musical career at Def Jam and a brief stint as the label’s president and CEO, Jay bought out his own contract for $5 million. Leaving Def Jam gave him the freedom to sign to Roc Nation, a label he founded as part of 10-year partnership with Live Nation worth $200 million. With “On to the Next One,” Jay spun this result into a narrative about the level of control he wielded over his own career. He had so much power, he suggested, he could buy his freedom.
“I’m riding dirty, tryna get filthy/Pablo Picasso, Rothkos, Rilkes/Graduated to the MoMA/And I did all of this without a diploma” — “Who Gon Stop Me” (2011)

JAY-Z has been an art collector since 2005, but this obsession didn’t become a focus of his music until several years later. The cover of his 2011 memoir, Decoded, features some of Andy Warhol’s work. And he constantly name-dropped Jean-Michel Basquiat in his raps before eventually purchasing one of the artist’s paintings for $4.5 million. His “graduation to the MoMA” from the corner represented both a refinement of taste and an entrance into high society. The art collection mentioned across his 2013 album Magna Carta Holy Grail is worth $493 million.
“Only spot a few blacks the higher I go/What’s up to Will? Shout out to O/That ain’t enough, we gonna need a million more” — “Murder to Excellence” (2011)

Hov’s ambition to become a part of the billionaire boys club meant distancing him from people who look like him. There are only 13 black people as rich as he is (or richer). In his mind, his climb put him in an exclusive class with people like Will Smith, Oprah Winfrey, and Barack Obama. He isn’t satisfied with simply making it to such a tier, though—he longs to kick open a door so that others may add to the ranks of the black upper class. To his credit, Jay has made financial freedom both a personal and global initiative, putting his money where his mouth is with his Shawn Carter Foundation and by backing poverty-fighting causes around the world.
“Would’ve brought the Nets to Brooklyn for free/Except I made millions off it, you fuckin’ dweeb/I still own the building, I’m still keeping my seat/Y’all buy that bullshit, you’d better keep y’all receipt” — “Open Letter” (2013)

After becoming a minority owner of the Brooklyn Nets in 2012 (with less than 1 percent of a share) and making a mint off of his disproportionate power, JAY-Z was ready to cash out. In 2013, his Roc Nation label partnered with Universal and he sold his stake in the Nets to launch Roc Nation Sports. “Open Letter” was released, in part, as a response to criticism about the size of his stake and the timing of his departure from the team. Here, the Brooklyn boy compares the money he made off bringing the Nets home to a finder’s fee and dismisses the idea that he won’t still be king in Barclays Center, whether he owns the building or not.
“Generational wealth, that’s the key/My parents ain’t have shit, so that shift started with me/My mom took her money, she bought me bonds/That was the sweetest thing of all time” — “Legacy” (2017)


With his own status as an elite businessman solidified by 2017, Jay started to look ahead: For the first time in his family’s history, he established security for those in his line of succession. On “Legacy,” he traced his desire to build something for his future generations to a thoughtful gesture his mother once made toward his own growth.
“Oh, we gon’ reach a billi’ first/I told my wife the spiritual shit really work” — “Family Feud” (2017)

After several years of trying to speak billionaire status into reality in his raps, Jay finally called his shot, putting competitors like Diddy and Dr. Dre on notice.
“In the land of the free, where the blacks enslaved/Three-fifths of a man, I believe’s the phrase/I’m 50 percent of D’USSÉ and it’s debt free/100 percent of Ace of Spades, worth half a B/Roc Nation, half of that, that’s my piece/Hunnid percent of TIDAL to bust it up with my Gs/ … I ain’t got a billion streams, got a billion dollars” — “What’s Free” (2018)

The American Dream is the idea that through equality of opportunity anyone can achieve anything. But that idea is at odds with the reality of black life. Somewhere amid those conflicting notions, JAY-Z found a way to turn rap into an empire. And he’s been documenting it for years—every lyric and every boast is another Investopedia entry. His art represents his financial life in a way no other rapper’s can. Tally up the earnings from all of his ventures, and you have rap’s first billionaire.